A settling foundation can cause major damage to your home.  As your foundation sinks it pulls apart the structure above.

Signs of a settling foundation:

Outside of the House

The concentrically loaded “Stabil-Loc” foundation piering system is the strongest, deepest, most dependable method of lifting, leveling, and stabilizing a foundation in the foundation repair industry.

Our method of providing the property owner a permanent solution has been independently engineered, independently tested for compressive load carrying capacity, and patented by the United States Patent Office. (Patent No.: US 8,206,063 B2)

If you are considering some type of foundation repair or foundation piering, you are going to have to deal with basement waterproofing contractors and foundation repair contractors who will try to sell you their method instead of providing a broad base of information and then allowing you to decide which system is right for you and your foundation. Since they tend to not make that information available to the public, we will do it for them. First, let’s get some misconceptions out of the way.

A crack in the foundation or basement wall means you need piering work. NOT NECESSARILY—Just because it cracked doesn’t mean that settling has occurred. We require 3 forms of confirmation that settling has occurred. Visible damage on the outside of the foundation. Visible damage on the inside of the house, such as cracks in sheet rock, sticking doors, etc., and measureable changes in the elevation of the footing. We use very sensitive and sophisticated equipment to determine the location of breaks and extent of settling. We think this makes good sense.

An Engineer putting his seal on a piering system means its the best. NO- it means that it meets basic minimum standards of performance. Tested safety load factor is the magic number when comparing one system to another. The higher the number, the better the pier can withstand the weight of the house sitting on top of it, especially if the pier is not installed perfectly straight, and most aren’t.

Steel foundation piers that are not galvanized will rust away and the pier will fail. BALONEY—take a hot dipped galvanized pipe and push it into the ground with 35,000 lbs. of hydraulic pressure, and the soil can peel the galvanized coating off like peeling a potato with a potato peeler. Some piers are made out of aluminized steel in an attempt to prevent corrosion and save money, but aluminized steel is designed to bend. That’s why they make muffler pipe out of it. Typically, they fill it with concrete to increase its strength, but it still is not very good engineering. High strength steel is the way to go, but it is expensive.

There are two fundamental designs in foundation piering systems. The first is called “Eccentrically Loaded”. Eccentrically loaded foundation piers are attached to the outer edge of the footing with a large bracket, and the bracket is used as resistance to push the pier into the ground. This causes off-set loads on the pier, because it is not directly under the wall being lifted, and this is not good engineering. However, it is easy to install and the contractor saves labor costs.

The second is called “Concentrically Loaded”. Concentrically loaded foundation piers are installed directly under the wall being lifted and use the foundation as resistance to push the pier into the ground. It requires a lot more digging, but it just makes sense to do it this way because there are no off-set loads created. 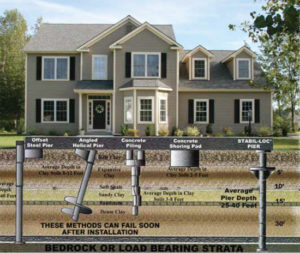 The process of digging beneath the footing of your house and pouring a bigger footing under the one you have is old technology.  If someone tries to sell you a concrete shoring pad, please ask them to leave.

They are 6” in diameter and 12” long. They are concentrically loaded, which is good, and they work well in sandy soils, but they are too large in diameter to go deep enough to be effective in clay soils. So they go to what they call the “point of refusal”. This is not bedrock. This is the point at which additional pressure from the ram will push the ram backwards up through the footing, causing more damage. If someone uses the term “point of refusal”, you do not want to own his pier unless bedrock is within 6 or 8 feet of the surface.

Helical piers have always been used to anchor down guys on telephone poles and to tie mobile homes to the ground to prevent the wind from blowing them over.  But recently someone got the bright idea to hold a house up with them. They are screwed in at an angle, they don’t work very well, and they break easily, but they are ”new and shiny” in the marketplace.

The biggest failing of these first three types of piers is their inability to go deep enough to reach bedrock or stable strata. Stable Strata in our area of the country is generally 30-40 feet or more. For this reason, shoring pads, pushed concrete pilings, and helical piers, should be regarded only as a temporary support system to be dealt with again later.

The fourth type of pier is the 3” off-set steel pipe pushed foundation pier. It is attached to the outer edge of the footing with a bracket, making it an eccentrically loaded pier. The good thing about this pier is that at least you can push it all the way to stable strata. The bad thing though is the built-in off-set load factor. In an attempt to reduce the off-set load, many contractors chop a big section out of the footing to get the bracket closer to the wall. This practice is widespread in the industry, but cannot be considered wise. Even with high strength steel, the tested and published safety load factor is still only 2 to 1. But it is cheap to install so the contractor makes more profit.

The Stabil-Loc Foundation Piering System has a patent pending load bearing design.  The Stabil-Loc pier installs directly under the wall being lifted. Its unique interlocking high strength steel construction can support up to 300,000 lbs. There are no bolts, no brackets, no breaking the footing, and no off-set loads. Our pier carries an Engineer Certified safety factor of more than 10 to 1. We can push this pier to China if we need to, to get to bedrock, and we can lift Ft. Knox with it and hold it up forever!

Contact us today to find out if your foundation is a good candidate for foundation piering. 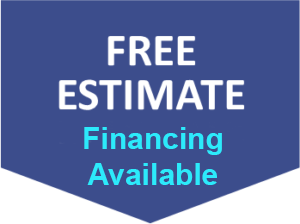 It may seem old fashioned and simple; however, we have built the best reputation in the industry on it and it is this:

"We treat our customers the way we want to be treated." 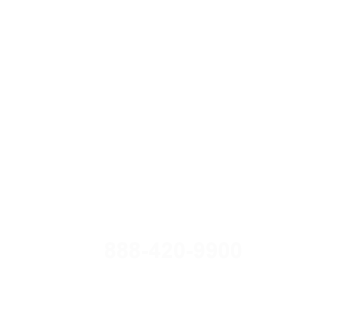